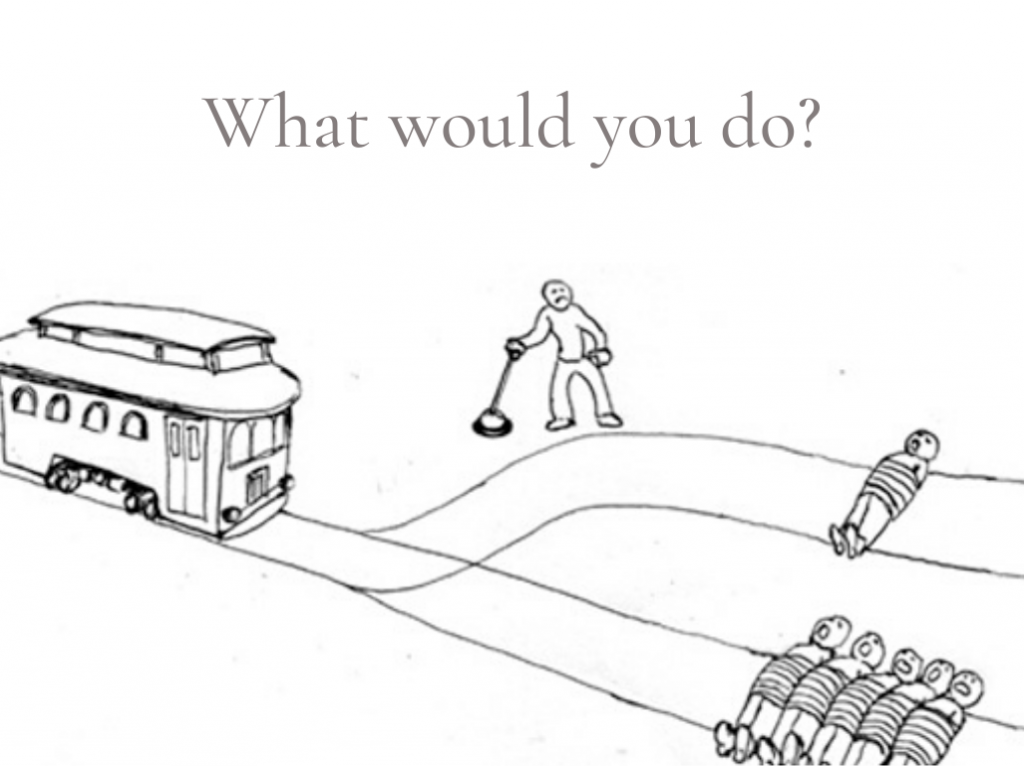 Two weeks ago, I stumbled upon a Facebook post that posed a hypothetical scenario where all solutions entailed one sort of unethical act, or another. Prior to the post, I had only vaguely known about the Trolley Problem; I thought of it as a mere unsolvable riddle. But upon researching the origin of the dilemma, I learned that it had largely interesting implications.

The Trolley Problem is an ethical dilemma, first presented by philosopher Phillipa Foot in her paper entitled “The Problem of Abortion and the Doctrine of the Double Effect”, published in 1967 and later developed by Judith Jardis Thomson.

The situation is like so: A runaway trolley is headed down the tracks at a high speed. Ahead, there are five people tied and cannot move, and the trolley is headed straight for them. You are an onlooker next to a lever that, if pulled, will make the trolley switch to a different track. On this secondary track, however, there is one person.

There are two options: either do nothing and allow the trolley to continue ahead, thus killing five people. Or, pull the lever, and divert the trolley to the second track which would result in the death of that one person, but will ultimately mean the safety of the first five.

The Trolley Problem, therefore, forms a moral paradox. It investigates the consequences of an action, and allows us to consider whether its moral value is determined solely by its outcome. The dilemma, since it was first put forward, received different views.

From a classic utilitarian point of view, the lever must be pulled. Morally speaking, according to them, the action that would save the biggest number of lives is the better option. Therefore, sacrificing one life in order to save five is not only permissible but also obligatory.

Another viewpoint could be that human lives are incommensurable. On what grounds could someone decide that the one person on the second track should be sacrificed in order to save the rest? What makes their life less valued than that of the five others in the heat of the moment?

A different opinion would be that the onlooker’s decision to pull the lever is a participation in a moral wrongdoing, because otherwise, no one was going to be blamed for the accident.

There is no moral agreement for which is the moral option. Staying put or steering the trolley both lead to deaths, whether it is that of five people or one. So how can you exactly decide, on the spot, whose life is worth saving more?

Judith Jarvis Thomson developed a variation of the dilemma. It is called the ‘Fat Man’ dilemma. Instead of the lever, though, there is a fat man within arm’s reach to you. You are certain his weight could stop the trolley from barreling down if pushed onto the tracks.

Globally, the two dilemmas seem alike. Both scenarios have identical consequences: the survival of five people at the expense of one person’s death. When asked, however, most chose to pull the lever in the first example, but almost no one chose to shove the fat man onto the tracks in the second. Everyone felt discomfort at the thought of deliberately pushing a man to his death.

This is why Foot argued that there is a moral difference between killing a person, and letting someone die. It is called The Double Effect. According to her, it is permissible to cause harm (as a double effect) if the action entails a greater good. In return, it is not permissible to directly cause harm even if the end-result is the greater good. This is why pulling the lever is considered acceptable because it indirectly causes harm, while shoving the man onto the tracks is more of an active action. It is also a matter of intention — the bystander does not intend to personally harm the person on the second track when pulling the lever, but in the second variation, they intend his death to save the rest.

The Trolley Problem has sparked many arguments. Thomson for example, had a different perspective. Going off on the basis that everyone had equal rights, choosing to sacrifice one person to save five is still wrong. But while the solutions differ, thought-experiments like The Trolley Problem are not supposed to have a consensus. They are posed to analyze our moral intuitions by contemplating the multiple justifications of the answers.

Authenticity, Can We Have An Authentic Life?

Are Female Leaders Better at Managing the Coronavirus Crisis?