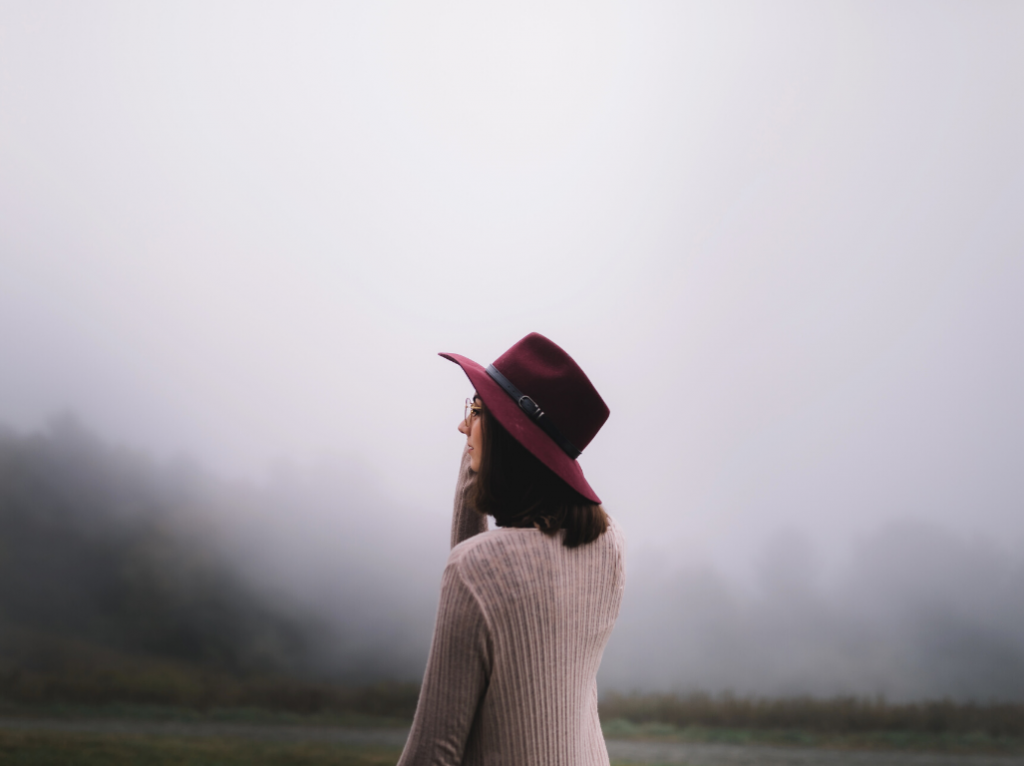 Like in a mixture of two fairy tales, she strolled along that large sidewalk as though it was the marked road within the forest. The forbidden forest by which she chose her path to reach her sick grandmother with food and medicine. Just like Red Riding hood, she wore a cloak with the color of blood. she held her purse with her right hand and made her way through the cold of that November day with confident steps.

She seemed very beautiful holding her head cover so as not to be touched by the cold wind. She reminded him of Snow White for some reason. Her dark hair dangling to the side, as some locks of her hair danced back and forth with the wind. The wolf was roaming around, focused on what she was holding. He kept a safe distance mingling in the crowd. She was waiting for the bus heading off-campus, with high hopes that she would find a seat to not have a ride home standing. For public transportation could sometimes be very crowded.

The bag! That’s all that the wolf was looking at. He did not eat that day so he would do anything to fill his increasing hunger. He knew she was heading for her grandmother with the weekly supply of medicine and definitely some delicious dishes as always. It was very simple. He took the chance of being seen and risking her reaction of making a scene if he approached at the wrong moment. He safely managed to get on the bus. However, he lost sight of her within the pushing bodies of people, who were also urging him to take a seat.

The wolf was in a difficult spot, he risked a lot and lost all of it in a second. “Hey!” someone reached for his shoulder, following the pull, the wolf turned and there she was. She was facing him with her red cloak. For some reason, his sight started getting foggy and the world around him started spinning. “Hey! Where did you go?” she said as she shook his shoulder once again causing him to wake up from his haze. “I was daydreaming, huh! Sorry for that,” he replied almost uncertain.

He isn’t the wolf anymore, he is merely a young gentleman riding a university bus alongside other people of his age. He was daydreaming or dramatizing what seemed to be a normal encounter with an old friend. Actually, she was not an old friend, but someone very dear to him. They were too much of friends that things became complicated. Indeed, even friendship can be complicated. Well, at least this one.

Human relations are all complicated, whether friendships, romantic relationships, or just acquaintance. Humans are complicated in nature. People coexist with each other in a world where conflict and differences occur. Learning how to effectively manage those problems can have a great impact on the quality of the relationship. Conflicts give people the opportunity to find the appropriate decisions and the ways for a solution to the problems with minimal negative events. Simply, it’s complicated, that’s the irony of it.

He came to his senses now, he was the hunter and now he is the prey. He thought for a moment that he could make her understand as well, but nothing. “I pity you, you know! After all this time you don’t get it. Just leave me alone, man. do something good with your life” she said this with the biggest hope of not being responded to, and she wasn’t. He didn’t know from where to start, He didn’t know from where to start or whether he will say anything of value. A bunch of meaningless words, sorry, but meaningless, sorry, but meaningless. Conveying his last bits of affection? That would make him even bigger of a naïve.

He saw her as she leaped off with his hopes dragged behind her along the crowd heading in every direction. He used to track her as she vanished in the distance, but this time he did not, for he knew he had nothing to see and no business in doing that. This made him feel more pity for himself. His actions were based on the simple but very powerful expression of “what if?”. This made him dwell in possibilities and re-acts of each pause of speech, each gesture of a hand, and each meaningless gaze she did. He sat there looking at the view changing, portraying a building after the other, some random stops at traffic lights, and others at the bus stop. People coming in and others coming out, with nothing remarkable to notice. The city with its noise, movement, and people tuned quite, grey, and lifeless.

“There is plenty of fish in the sea,” who the hell said that and who’s stupid enough to actually believe it? Wait! He did not believe in it and looked where that took him. That’s a good thing, right? Well, it’s complicated.

The bus halted at the last stop. The driver declared it. He sat in the middle row of seats with an old lady who was oddly happy gathering her many colorful plastic bags and holding them carefully as she descended the two steps off the bus. It was dull weather: suffocating air with a yellowish atmosphere like an Instagram filter, very convenient for someone’s hopes to be crushed.

The traffic light was green then red. He thought of all the days when he respected the pedestrian rules and decided that a day of disobedience won’t hurt. As he made his first steps, a giant white figure with an alarming loud siren followed with an unbearable squeaking of tires appeared out of nowhere, then nothing. it all faded to black.

Well, unlike his long day, death is simple.