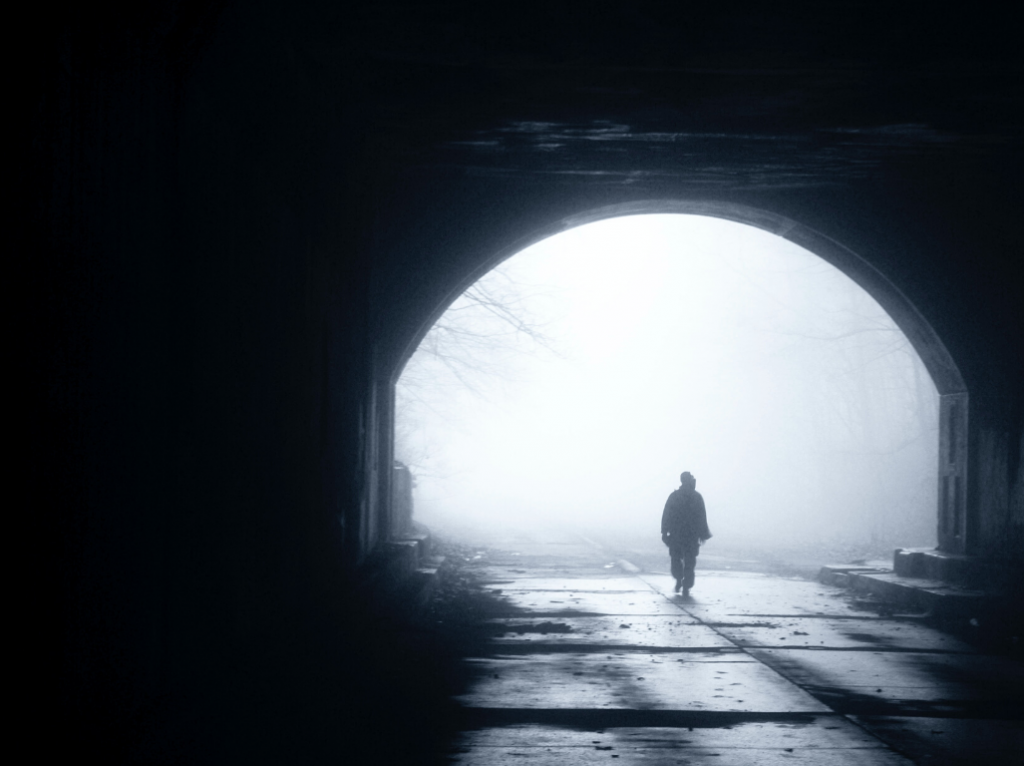 When I Died – Short Story

I was on my way home when I died. It was a car accident, nothing particularly remarkable, but fatal nonetheless. It was a painless death, the medics tried their best to save me, but it was pointless. My body was so utterly shattered, I was better off. I was not aware I was dying until I died. I did not know I was not in the physical world until the medics took my shattered cadaver in the ambulance and I stood there on the pavement like a passerby curious about the accident ahead of me.

I stood there as the police arrived to direct traffic, and the fire department to distinguish the flames and clear the road from debris. I did not know where to go, I died, but I was not gone yet, that must have meant something. I do not know why, but I kept thinking of my deceased mother. I remembered the last day I saw her, the day of our last visit to the hospital.

I was 13, I went with my father to visit my mother in the hospital; we got there in the morning, during that time the room was crowded with relatives. My mother asked me to come closer, she whispered to me some words I could not understand, then she laughed so I laughed with her without telling her that she actually did not understand what she had said.

Everyone in the room that day tried to know what she said to me, and I would not tell anyone because my mother told me and it is a secret. This made her smile, and no one including her knew that I was truly just as oblivious as everyone else. After returning home I was really upset that I did not hear her, this secret is just for me yet I do not know what is it?

The next morning my mother died. The first thing that came in my mind when hearing about her is the secret, maybe it would have guided me throughout my later days, or it would be just a joke that would make me laugh for the rest of my life. Ever since that incident, I felt my memory disconnected, a terrible hurdle, a grave mistake, like an architectural error, which was seen only after finishing construction. That was a lifetime ago, 29 years to be exact. And that day stayed a vivid imagination in my head.

I stood there under the rain, observing the red and blue colours in the distance, the sirens sound, the passing cars slowing down to get a glimpse of what happened. And, that is when I met him. I did not see him properly, just a figure and unlike the living, he was seeing me I heard his authoritative but calm voice “you do not have any regrets, do you?”

Next thing I knew I was in an entirely different place. A place with vague appearances; it seemed like a building, a train station actually. Yet, no walls were in sight, though some columns stood to the right with such grandeur supporting what it seemed like a non-existing ceiling. Besides the columns stood a number of chairs with the same vague appearance and greyish colour, they were there as an extension from the ground. No wood, no metal, just a shape of a long arms chair coming out from the ground. A near edge that seemed to be the train pathway, I did not go for a look, but I had a sense of what it was.

I was alone in an odd white place. And, that is when I met him, again.

“What happened, where am I?” I asked,

“You died!” He said, “matter of fact, no point in mincing words.”

“There was a truck and it was skidding,” I said.

“I died?” I quickly inquired.

“Yes,” he answered passively” but don’t feel bad about it, everybody dies at some point”.

I looked around; there was nothingness, just him and me.

“What is this place?” I asked, “Is this the afterlife?”

“It seems more like a train station,” I said with some hope of not being mistaken.

“Hum” he seemed to consider my remark, “each person sees what he likes” he broke after a moment, “but it does seem like a train station,” he said smiling to me.

“Not quite,” he replied.

“Not that either.” He said to me amused by my excessive tries to know who or what he is. “It does matter what or who I am, you would not understand even if I told you, what matters is you and what are you doing here.” He said, contemplating our surroundings as if never been here before.

“Me? I died. What’s more to it than that?” I exploded with a bit of fury then I remembered, “My kids, and my wife, what about them?” I asked,” Will they be alright?”

“That’s what I like to hear,” he said,” you have just died and your main concern is for your family, that’s good stuff, right there.”

I looked at him with fascination; to me, he did not look like God, or anything similar for that matter. He looked like some very old man with some vague authority characters. He was wearing a long sleeping gown, a hat that rotated at the top. A pair of oval glasses and a very long beard that was tied up somehow in the middle.

“Don’t worry” he started,” your family will be fine, your kids will remember you as perfect in every way. Your wife will cry on the outside, but she will be secretly relieved. To be fair, your marriage was falling apart. If it’s any consolation, she will feel very guilty for feeling relieved.”

“Owe, so what happens now?” I asked with some oddness for feeling relieved, “do I go to heaven, or hell or something?”

“Neither,” he said simply, “you will be reincarnated.”

“Ah, so the Hindus were right?”

“All religions are right in their own way” he replied to me, “walk with me.”

He started moving away so I followed along as we strolled through the void. Or through that odd train station in my perspective.

“Where are we going?” I asked.

“Nowhere in particular,” he said, “It’s just nice to walk as we talk.”

“So, what’s the point then, when I will be reborn, I will be a blank slate, right? A baby. So, all my experiences and everything I did in this life won’t matter, would it?”

“Not quite so,” he replied and continued explaining, “you have within you all the knowledge and experiences of all your past lives, you just do not remember them right now.”

He stopped walking and took me by the shoulders. His touch felt human; he was not looking at me in the eyes, but his eyes were fixed on something behind me as he went on explaining.

“Your soul is more magnificent, beautiful, and gigantic than you could possibly imagine” he started again, “the human mind can only contain a fraction of what you are. It is like sticking your finger in a glass of water, to see if it is hot or cold. You put a tiny part of yourself into a vessel, and when you bring it back out, you have gained all the experiences it had. You have been in this one for the last 42 years. Therefore, you have not stretched out yet, and felt the rest of your immense consciousness. If we stay here long enough, you will start remembering everything, but there is no point in doing so between each life.”

“How many times have I been reincarnated then?” I asked as if it was the simplest thing ever.

“Oh, lots, lots and lots, and it’s lots of different lives. This time around, you will be a Chinese peasant girl in 540 A.D.”