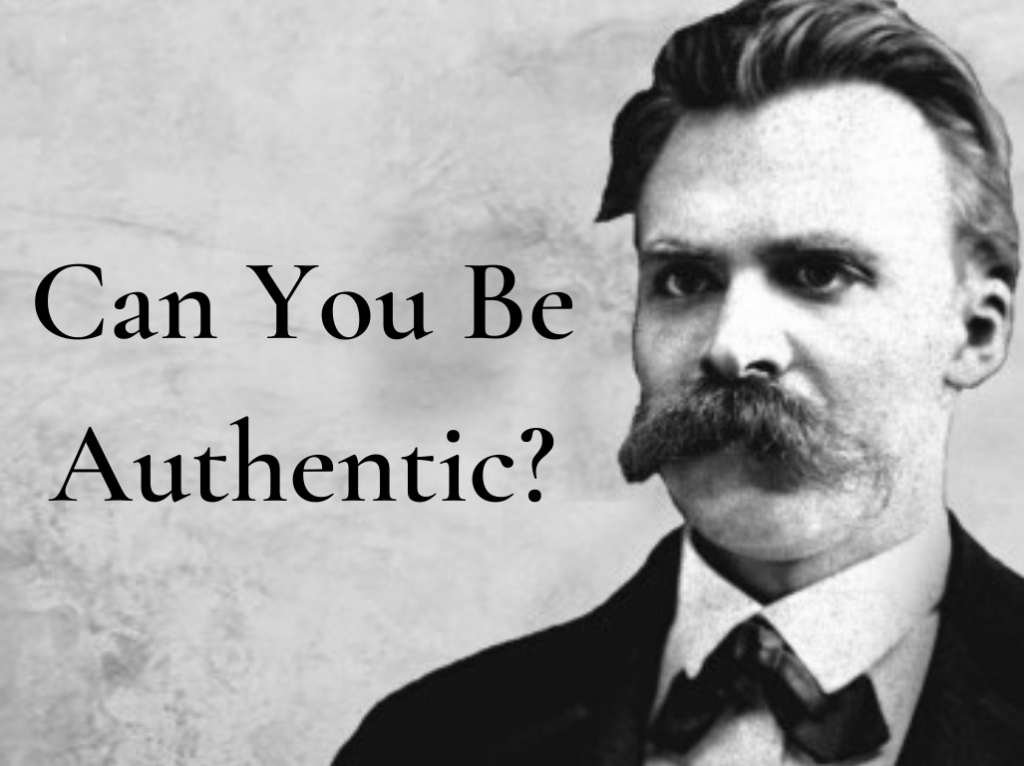 Authenticity, Can We Have An Authentic Life?

‘’Be yourself’’ or’’ be authentic’’ seems to be common advice and a very encouraged rule in modern life, but what do we mean by ” be yourself”, and is it realistic?

Personal authenticity is a human construct. It is generally defined as being true to yourself without pretense. Following your own standards and living up to your truth. The quest for authenticity is a quest for autonomy. To be the architect of one’s own life without succumbing to cultural conditioning and external factors like social rejection. An inauthentic life, according to the general notion, seems to cause inner conflicts and prevents us from reaching a state of harmony. In this article, I will show the different standpoints regarding authenticity by different philosophers and thinkers who explored this concept.

Who Are we? And How Do We Become Who We Truly Are?

Authenticity is a reflection of the ”self” or the identity, and a lot of thinkers attempted to understand the human mind, with its potentialities and its tendencies. People are generally afraid of delving deep into their minds, for it reveals complex depths they can not be ready to face. So we will start by trying to understand this ”Self” based on Nietzsche’s definition.

Nietzsche was the first to conceive the psyche as constituted of multiple layers and that it is impossible to understand it all. So how can we know ourselves?

If the psyche is a vast limitless territory, is it possible to be ourselves and be ”authentic” while we do not have access to these sides of us?  The ability of the human mind to understand cognitive processes or to examine great amounts of information is limited, further leading to an incomplete understanding or an erroneous representation of what is observed or experienced.

Human knowledge always remains incomplete, yet without full awareness, no complete authenticity is attainable, so at any given moment, authenticity can be only partial.

Can We Create Ourselves?

Some philosophers claim that we are absolutely free to create ourselves, but is that possible?

As humans, we can not be fashioned in any way we please. Each one of us has a deep nature that sets limits on who to become. Deep down, there is something unteachable, of a spiritual nature that can not be acquired or transformed.

Nietzsche describes humans as chaos. In contrast to other philosophers who claim that the mind is a unitary device, Nietzsche says that the mind is a multiplicity, an accumulation of intertwined psychological entities. These entities are influenced by life’s experiences and memories, by social conditioning and the traits inherited by our ancestors. According to him, even historical factors influence who we are through the traditions of past cultures that live on within us from the deeper layer of our psyche.

He says that our freedom to create ourselves is limited because of the already existing drives that we can not control. The most general picture of our essence is an association of drives with constant rivalry and particular alliances with each other. He described the human mind as a city in which numerous sub-personalities try to coexist together, so the task according to Nietzsche is to harmonize these opposing drives and impulses and provide coordination. As Nietzche says” to make ourselves, to shape a from various elements, that is the task! The task of a sculptor! Of a productive human being! ”

Now that we have introduced the ‘’self’’ we shall explore authenticity from different angles according to some philosophers.

1/ For Jean Jack Rousseau, authenticity is diminished by the need for esteem that is fulfilled by external sources. He argues that personal authenticity comes from within and does not require the approval of others.

2/The existentialist philosopher Martin Heidegger said that authenticity is choosing the nature of one’s existence and identity. He also linked authenticity to an awareness of mortality, since only by keeping in mind one’s inevitable death can one lead a truly authentic life. He said that authenticity and inauthenticity are not exclusive or separate, but they have a complex relationship: They are complementary and interdependent, and we can not disregard external influences because they are natural.

3/Jean-Paul Sartre argued that there is no unchanging essence to the self, but we have a free will that gives us complete freedom to determine our lives from the choices available. According to Sartre, the human being first comes into existence and then continually defines oneself, rather than coming into being with an already given nature. So for Sartre, authenticity requires taking full responsibility for our life, choices, and actions. Therefore the anxiety or ‘angst’ which results from our realization of our own inescapable freedom is an integral part of authentic living. However, it should be emphasized that the individual’s freedom is constrained by nature and society, as well as by their own limitations.

What Are The Limitations Of Full Authenticity?

Some argue that authenticity is impossible to achieve as an ongoing state of being since any real authenticity is hard to maintain indefinitely. Our identity is multidimensional and dynamic, So they will coexist in one individual multiple identities depending on the roles the individual holds in society, including personal, occupational, cultural, ethnic, national, political, and religious identities. The dynamics of identity can be complex and unpredictable.

According to Jung, who was immensely influenced by Nietzche, We have many archetypes in our unconscious that have totally different desires, beliefs, and priorities as if there are other people residing in our psyche. So how can we settle on one definite character? These factors make it hard to identify one stable identity or one ”self.”

Authenticity is supposed to be a reflection of our identity, which can not be measured or defined. Complete authenticity is unattainable. Our feelings, opinions, and habits are always evolving. Personal authenticity involves principles and ideals which are continually reevaluated through self-examination and social interaction, so who is to judge if someone else is being authentic or not?

There are a lot of situations in which we have to compromise our opinions because of priorities. For example, you can not declare your offensive opinions to your boss or you will risk losing your job, so here you are being inauthentic according to the modern standards of authenticity. However, true authenticity isn’t about expressing one’s inner self with its full range of shifting emotions in all situations. Setting priorities and unbiased self-awareness in the present moment are of great importance.

Another factor that can limit our authenticity is our personal filters that prevent objective awareness. Achieving personal authenticity is complicated by the presence of illusions and biases, including self-deception, wishful thinking, and the tendency to behave differently while under observation in social gatherings.

Other factors include one’s prior programming, the fear of rejection and failure, and the social pressure to conform (and thus live inauthentically). In the latter cases, individuals typically try to show their best faces and express what is expected of them so that they will be perceived in a good light. In many situations, the need for collaboration with others may demand some adaptation, that is, some inauthentic compromise. Being under constant observation inhibits authenticity. Thus, politicians, for instance, cannot be authentic, since they always have to appear confident and nearly flawless.

Another limitation is related to the language used, which is open to misinterpretation, and words and language are inadequate for expressing the full spectrum of one’s thoughts and feelings. In addition, words and sentences are often ambiguous, having more than one possible meaning. A completely clear language with a direct and evident correspondence between thoughts and words does not exist. Sometimes individuals do not even understand themselves, so it definitely sets limits to authenticity.

What Can We Conclude?

So we can define authenticity as an individualistic and continuous mission that differs from one to another and does not follow a defined set of rules since it is always contextual. The question that we can ask here is: is authenticity possible, or even desirable? The question is possibly misleading as it implies an absolute yes or no answer, and does not give space to any possibility of ‘partial authenticity’. This leads us toward an interpretation of the concept of authenticity as an absolute, which is unrealistic.

These philosophical views on personal authenticity vary, but there is a common theme of personal authenticity as a dynamic process of endless becoming in a changing society and world, rather than a fixed state of being. We can conclude that authenticity and inauthenticity should not be considered as mutually exclusive states, but rather as mutually dependent concepts. Due to the imperfection of humans, absolute authenticity is not attainable. Partial and  realistic authenticity isn’t about expressing one’s inner self with its full range of shifting emotions in all situations. Setting priorities and unbiased self-awareness in the present moment are of great importance.

Beyond Good And Will

The Dawn Of Day