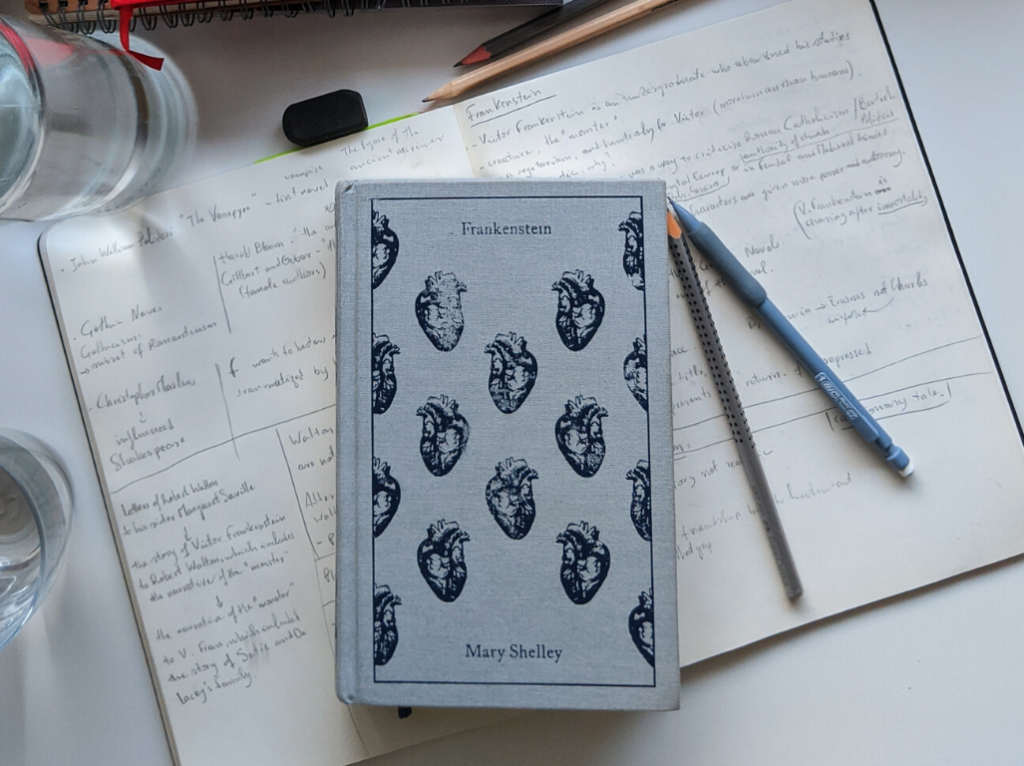 First published in 1818, Frankenstein or, The Modern Prometheus is a novel by renowned English author, Mary Shelley. It tells the story of Victor Frankenstein, a young student passionate about science, who brings to life a body assembled of parts stolen from graveyards. Once the monster becomes alive, Frankenstein is repelled and disgusted by its appearance and abandons it. Since then, a journey of rejection, hatred and revenge starts between both the young scientist and his creation.

The Making of Frankenstein or, The Modern Prometheus:

Mary Shelley came up with the story at the age of 18, while she was reading German ghost stories translated into French from the book Fantasmagoriana with her husband-to-be, Percy Bysshe Shelley and Byron. It was in 1816, otherwise known as the Year Without a Summer because of the climate abnormalities that cause a severe decrease in temperatures. So they could not be out, and had to find ways to distract themselves and keep time moving. As an attempt to find a distraction, Byron proposed that they “each write a ghost story.”

It was a sort of challenge, Lord Byron and Percy Shelley being experienced writers did not find any difficulties in starting a story. Unlike Mary Shelley, who was unable to think of one, she became very anxious: “Have you thought of a story? I was asked each morning, and each morning I was forced to reply with a mortifying negative.” She stated in the introduction. One evening, they started discussing the nature of the principle of life. “Perhaps a corpse would be re-animated”, Mary thought, “galvanism had given a token of such things”. After midnight, she was possessed by her imagination. She was unable to sleep as she beheld the “grim terrors” of her “waking dream”:

“I saw the pale student of unhallowed arts kneeling beside the thing he had put together. I saw the hideous phantasm of a man stretched out, and then, on the working of some powerful engine, show signs of life, and stir with an uneasy, half vital motion. Frightful must it be; for supremely frightful would be the effect of any human endeavor to mock the stupendous mechanism of the Creator of the world”

She then started her story encouraged by her lover until it became what is known as Frankenstein.

The novel is written in the form of a frame story. It starts with Captain Walton’s letters to his sisters, which contains Victor Frankenstein’s narration. The narration of the Monster is also included. It is set all over continental Europe as most Gothic novels. Mary Shelley fuses the elements of gothic literature and the romantic movement that made her novel a classic of 18th century English literature as well as Gothic literature.

The Theme of Grief:

Mary Shelley explores multiple themes. Major ones are grief, life and death, alienation, rejection and revenge. The theme of grief is displayed by Victor. After the death of his mother, he plunges in grief which isolates him and alienates him from human society with hopes of finding a way to bring back life to a dead corpse. Perhaps he thought he could play God’s role and solve the mystery of life and death in order to bring his mother back to life. With this theme, Shelley illustrates a certain degree of grief, how it affects the human psyche and leads them to commit unimaginable acts whether against nature or against other individuals.

The Theme of Rejection:

Rejection, on the other hand, is displayed by the Monster. It started in the night in which Victor infused the assembled corpse with life. Left it abandoned because of its hideous appearance that he chose himself. In confusion, without any basic knowledge and in search for its creator, the Monster brings fear and horror wherever it goes because of its “hideousness”. The Monster later learned how to read and understand a lot of things because of the books it took from Victor’s laboratory the day it came to life. Also by hiding in a small hut next to a cottage, it observes its inhabitants, and learns how to read thanks to these observations.

Time passes and the Monster gets attached to them and regards them as his “friends”, then it decides to reveal itself to them. The cottage inhabitants get equally terrified and horrified, that they run away directly from their home. Heartbroken and devastated, the Monster swears to chase and take revenge against its creator for he created it and then abandoned it in a cruel world. With this theme, Shelley conveys how cruel humans can get, how superficial they are and how these two affect their subject in the most negative way.

It is believed that the novel is a reflection of Mary Shelley’s life, the grief that accompanied the death of her mother and her own children and being a woman in the 17th century. The novel also explores numerous other minor themes that are psychological, social and historical to make it an outstanding work of literature that holds a considerable place in English literature that keeps inspiring writers, movie directors and other people for centuries. It would take a lot of time and pages to talk about why this book is essential in fiction, but the best way to discover and relish it is to read it.

Should You Read Self-Help Books?